So long, and thanks for all the fish!

Yesterday at 12AM I opened up Kmail and got quite surprised by this nice little announcement about a minor release of a certain nice little desktop environment. Since I've been making it myself a little too hard lately when it comes to finding a good balance between following KDE, social life ® and the always exciting workI did not notice that 4.1 was about to be released into the wild yesterday.

Almost three years ago I started following our Planet and got bit by bit more interested in the KDE4 terminology and all the other vaporware that surrounded it. At some point Jess Hall wrote a blog with the title 'KDE4 - understanding the buzz' in which she tried to describe what KDE4 was at that point and what it would probably be.

When I saw the screenshots in that article, that looked like KDE3 on Mexican drugs (though the gigantic first stage of porting was already done), I started running the codebase by compiling it daily on my own old Acer Aspire laptop. Every single day the changes to many files were stunning and the fast improving socially motivated attitude within the core group was absolutely fantastic.

About 1,5 years ago I removed my kde4-devel user and started building the codebase within my own user account and switched over to the devel code right away. At that time I didn't needed my laptop at the office so usage demands were low and the stability of the trunk code at that time was far from usable, it crashed daily - if not - hourly. But I was absolutely fine with that as the improvements were far too exciting.

In January last year KDE 4.0 got released to the public, a release that created large amounts of excitement, press coverage, but also a lot of controversy. Since a project like KDE is so huge both on technical as management level I think we can safely say that all the people - from the different working groups, communicaters to the daily webloggers - have been building a miracle that can't be awarded enough times. I'm not sure if this one is going to be fully true but I just have to state that no traditional commercial company in the industry can achieve what all these people did in a short period.

So, back to the title of my blog. I'm fully aware that the title has been used in the development process more then once, especially when developers had to announce a certain milestone. So I'm going to bluntly announce here that from the next weekend on I'm going to stop compiling trunk code and switch over to stable 4.1 packages, as it is a solid and good working system now. Of course to the public 4.0 had to be what 4.1 is right now, but the reasons of the developers that decided to release code as 4.0 are in my eyes still very valid, communicated over and over and imho the media and users should stop 'looking back'.

Since yesterday I've been following press coverage on the release and most of the posts I have seen are ranging from average to very positive, which I think the whole KDE community can be very proud of! To use my favorite phrase from the HGTTG one last time:

So long KDE, and thanks for all the fish!

Since I'm even seeing yellow buttons in my sleep I just have to do my yes-im-in announcement with a touch of blue: 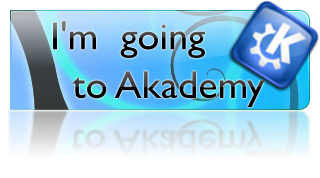